Dinner for TWO- Fill the Grill 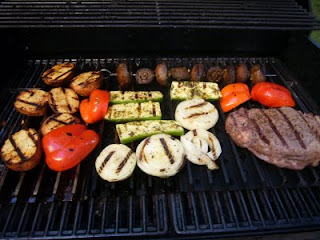 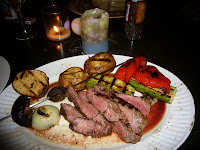 We filled the grill last night! I had to leave a little room on the grill for the one steak we planned to split. My wife loves this dinner for two because she uses one of everything:

The potatoes went on first, followed 15 minutes later by the the rest of the vegetables. It was a pretty site before the meat hit the grill. Last but not least the sirloin was grilled and taken off on the rare side. I pulled the veggies off first and made a nice looking plate again leaving room for the steak.

I cleared my plate! The potatoes were perfectly roasted and the vegetables were all at their best. I probably had 4 slices of the sirloin, where in the past I would have eaten the whole thing and maybe a few of the onions and mushrooms. My meal was 3/4 plants, 1 /4 beef. I’m shaking my head even as I type!

Dinner for two- with leftovers. Breakfast fritata coming right up.