My First Steak Cookoff was Darn Near Perfect! 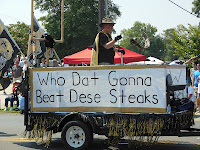 I drove there to meet the two teams who have been using GrillGrates– and winning.   The United Steaks of America Team in particular has won TEN 1sts or 2nds in steak cook-offs.  I had to go and meet these guys.  Little did I know I would be treated to a fabulous All-American event complete with a parade of pits and skits, and a steak dinner for 3500 around the town square. 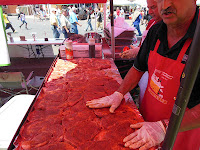 At 10:00am I parked myself next to a stand where the pits were judged for construction and showmanship.  78 Teams parade by many of them stopping to perform a skit for the judges.  The local funeral home was one of the more memorable.  The UnderSteakers performed a hot and fast funeral for Mr. Ribeye complete with casket, local pastor, and grieving widow.

After the judging stand the parade veered right and the pits drove straight and found their spots around the town square complete with a large courthouse in the center surrounded by towering Magnolia’s in bloom.

Each team was given 40 rib-eyes (previous winners were given more).  They picked the best 2 or 3 steaks to turn in that one steak.  Prep begins and the remaining steaks are seasoned and kept on ice to grill for the public dinner later that evening.  Pits were lit and appetizers are grilled first before steak turn-ins start later in the afternoon.  There is a window of time for the 78 teams to turn in their championship steak, no garnish and no running en- mass.  Turn in when you are ready and when you want.

I bounced between The USA Cook Team and Shorty Dunn and The Cook’em Up Gang– both previous winners of this contest.  The USA Cook Team was the 2011 winner using GrillGrates and these two teams have dueled many times for the top spot.  I only found one other team using GrillGrates as  I informally surveyed the pits and enjoyed Mangolia’s downtown square.  By now I had already decided I’m coming back next year with Susan- she’ll like this town and the event.

I watched the USA Cook Team get their Weber Kettle hot with lump charcoal and seasoned GrillGrates.  They grilled a test steak, stop watch and notebook in hand.  The “turn-in” steak must be medium- warm pink center.   Sometime in the middle of the afternoon the two best steaks went on the Weber and were seared to perfection on the GrillGrates.  The instant read thermometer guided them to the finish as the steaks cannot be cut or otherwise checked for doneness.  Into a plastic box no garish and off to the court house.

After turn-in the teams all had time to take a break before cooking up championship rib-eyes for the public that was lining up at four points around the square to pick up their plate with potato, salad, drink and roll- all for $15 per head.  3500 people picked a steak from one of the teams and tables were set all over the lawn around the square- you could have filmed a movie- by now my camera was full and I was using my phone. 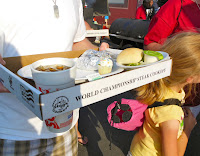 The award ceremonies were kicked off with prize money paid for showmanship and pit construction along with 5 places in steak with $4000 going to the champion.  5th Place was called then 4th was Shorty Dunn’s Cook -Em Up Gang, 3rd was The United Steaks of America.  They were both thrilled to place and I was happy for them and did not pay much attention when 2nd was called and then the Grand Champion- was The WTF Team– (Walker Tree Farm) the nice family I met earlier today using GrillGrates.

Two years in a row The World Championship Steak Cookoff was won grilling on GrillGrates.  Luckily I was able to get a picture of these grate winners!   Later I learned that the 5th place team  Lake Erling Sizzlers used GrillGrates too.  That made it 4 out the 5 money winners used GrillGrates – a near perfect day in a superb town called Magnolia Arkansas.

Got a championship story to tell?  Tell us Your Grate Story here or on Facebook.

Meal Prepping Has Gone to The Grills

Finally GrillGrates for the cult of the Big Green Egg!