Magnolia, AR May 19th 2012
Four of the five money winners in the hotly contested World Championship Steak Cook-off® grilled on GrillGrates, the award winning new grilling surface.
The 23rd annual competition saw 78 teams competing for the $4000 grand prize and money was paid through fifth place. The WTF Team (Walker Tree Farm) won this year’s contest followed closely by the two previous year’s winners, United Steaks of America Cook Team, and Shorty Dunn and The Cook-em Up Gang. All three teams have been consistently winning steak competitions in Texas, Oklahoma and Arkansas with GrillGrates. 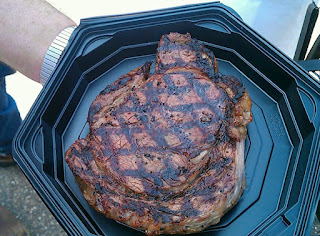 “GrillGrates are proving to be new technology at the grill surface that simply grills food better.” According to Brad Barrett, Founder and President of GrillGrate LLC. “GrillGrate won product of the year from the BBQ Pro’s of the National Barbecue Association in 2009 and now they are helping win championships.”
Most teams make their own rubs, a few make marinades and they all guard their processes carefully. Johnny Joseph of Shorty Dunn’s cook team commented after the awards ceremony that “A ‘Steakment’ was made in Magnolia!” “A steakment certainly was made and the secret is getting out that GrillGrates grill great steaks!” added Barrett.

GrillGratesare interlocking panels that form a new cooking surface on any grill. They lay on top of the existing grates or replace them altogether. The raised rail design allows for juices, marinades and sauces to sizzle in the valleys resulting in juicier more flavorful food. GrillGrates bring out foods natural flavors by protecting from charring flare-ups while vaporizing and sizzling juices and marinades back to the food for added flavor. GrillGrates are available at hardware, house-ware and outdoor retailers and on-line at grillgrate.com and amazon.com. They are available in several lengths as well as custom shapes for the Weber Kettle and Kamado style grills.

The Annual World Championship Steak Cook-off is part of the Magnolia Blossom Festival, held the 3rdSaturday in May in Magnolia, Arkansas. After turn-ins are made, 3500 steak dinner plates are served to the public. The teams grill rib-eye steaks provided to them by the festival and the public is invited to pick their championship steak from one of the teams. The award ceremony follows a sit-down dinner on the town square.
Contact:
Director, World Championship Steak Cook-off: David Nelson david.nelson@suddenlink.net 870-904-4126
GrillGrate LLC, Brad Barrett brad@grillgrate.com, 678-361-4491

Made in the USA. Cartersville, GA, Patents pending

The WHOLE FISH and NOTHING But the FISH