I am (finally) a Pellet Head! 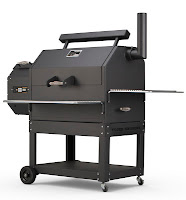 had to make the jump. I’ll admit to actually resisting getting a pellet grill. A grill with a plug just seemed foreign and complicated to me. Boy was I wrong!

I’m experiencing the same enthusiasm and pleasure I had when I got my Big Green Egg. I’m like a kid with a new toy! Its amazing how efficient the Yoder YS 640 is. And not just as a low and slow grill either. The first time I grilled steaks on the Yoder (removing the heat shield to direct grill over the burn pot) I was surprised at how fast the grill got to 650F.

The Yoder’s efficiency is matched with its environmental friendliness compared to briquettes or lump charcoal which put off a lot more smoke and soot. The ash in the bottom of the grill after 60 pounds of pellets would not fill a coffee cup. Compare that to the ash from briquettes which would fill a coffee pot!

My first low and slow was a pair of pork shoulders that spent 12 hours, then ribs and now its time for a brisket.

I think I’ve seen the future of grilling and it does have a plug after-all!
PS- Register to WIN a Yoder Smoker YS640!  Winner to be announced 12/13/13.

Is Griddling The Next Big Thing in Grilling?

Getting Back to the QUE! Praise the LARD!